We are now a third of the way to bag-and-tag day, and we are making great progress!

Our programmers are hard at work. They have re-imaged the roboRIO and have begun creating classes for the mechanisms of the robot.

Robot production is progressing marvelously as well. We have created prototypes of shooting, gear-collecting, and climbing mechanisms and are moving toward the production of an advanced prototype.

The awards committee has been working furiously to develop their ideas. Nominees for Dean’s List and Woodie Flowers have been finalized by our team, and the interviewing process has begun. Additionally, this year’s theme for the Chairman’s Award has been finalized, and brainstorming for the essay is well under way. Rough drafts of the Chairman’s mini-essays and TIMS essays have been completed and are now being edited and improved.

We have also begun preparation for scouting. We are updating the scouting website with this year’s game information and assessing the status of the tablets.

All members of team 230 are required to take a rules test, and members of the drive team must take a more in depth version to ensure that they have a solid understanding of FIRST Steamworks. The test is nearly completed and will soon be administered to members of the team. Students must pass the test in order to attend competitions or be on the drive team, if they wish. (Retakes are available to those who do not pass the first time; the point of the test is to familiarize the team with the rules of the game.)

With week three right around the corner, team 230 is gearing up for an exciting season. Remember to check back next week for more updates! 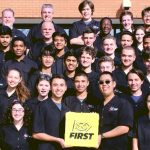