Shelton will send two robotics teams to compete in the international championships in St. Louis, Mo., later this month.

Team 230, also known as the Gaelhawks, have extended their season all the way to the First Robotics Competition international championship, which will take place April 26 to 29.

The Gaelhawks are made up of the following SHS students: Lusitania, Jacob, Chris, Josh, Brian, Jake, Victoria, Aravind, and Michael.

They will be accompanied by a younger robotics team composed of seventh grade students from the city’s intermediate school.

Counting down to St. Louis

As the team’s departure to St.Louis is just days away, they said, this is a surprisingly less busy time period for them.

Aside from packing their bags, team members said, they’re also preparing to ship their robot to meet them in St. Louis. With their 93-pound robot, Talon 19, packaged up, they don’t have the ability to make modifications to it in the days before it will appear in competition against teams from all over the globe.

Fortunately for the Gaelhawks, they have a practice robot they have been tweaking in preparation for the international championship.

“Having a practice robot is useful, because it allows the drive team to practice, and gives us time to create new strategies that we can use in competition,” said Aravind, the team’s safety captain. “We should have it running perfect when it’s time to compete.”

Ravishankar said the time the team is spending on making tweaks to its practice robot isn’t nearly as intense as the six-week building period it was allotted to build Talon 19, but once team members land in St. Louis, the pressure will be back on. There, Ravishankar said, their next task will be to duplicate on Talon 19 the changes they made to the practice robot.

Robotics is undeniably popular in Shelton.

The community supports all of its robotics teams to the fullest and it means the world to the team members.

Team 230’s lead driver, Michael, said the community support has been an important instrument in the Gaelhawks’ success.

“Being supported by the community allows us to do what we do,” said Michael. “Without all of our sponsors or help from mentors, we wouldn’t be able to build a robot as well as we do.”

Kichar said being the team’s driver can put a lot of pressure on him at times, but his teammates’ support makes all the difference.

“Sometimes it’s as simple as doing exactly what you’ve spent hours practicing out of competition for the past few weeks. Other times it’s not,” said Michael. “As long as you have your team behind you to support you, it’s a pretty easy job.”

The chance to travel to a different state for the opportunity to be crowned one of the world’s best robotics teams has been exciting for the Gaelhawks, but they’re maintaining their composure and taking it a step at a time.

One of the team’s members in charge of social media and public outreach, Lusitania, said this is her first year on a robotics team, and she was surprised to see the dedication of the Gaelhawks.

“Just the fact that we have the opportunity to share our robot on an international scale is amazing,” said Lusitania. “I didn’t know the hours were so long, but when I saw the rest of the team putting in the time and showing up, I was just amazed and started putting in the work, too.”

Aravind explained that the team’s work is divided into much more than just building the robot.

“The building is the toughest part, but it’s not the only part,” said Ravishankar. “It’s such a team effort and ecompasses so many different skills throughout the entire competition.”

Team 230’s season began with a six-week building period that consisted of team build sessions every weekday from 7 to 10 p.m. On weekends the sessions would last from 10 a.m. until 10 p.m.

For some team members, that was their favorite part of the season.

“My favorite part is working side by side with professionals that have done this for so many years,” said  Ravishankar. “We’re really thankful for the support we’ve received from all of our supporters, but especially our mentors, because their assistance will help us as we pursue futures in robotics or engineering.”

Building a sense of community

Despite the sometimes high level of competition and intensity, the Gaelhawks said, they’ve worked hard to build a sense of community, not only among themselves but with their opponents as well.

“You have one of our biggest competition, which is a team from Southington, they’ll come in and help. Or there’s another team called the ‘Technoticks,’ and they’ll come in and help. It’s all about gracious professionalism,” said Ravishankar while describing how a team could end up helping a team it’s competing against. “It’s not only about demonstrating sportsmanship ‘on the field’ but also establishing that sense of community while out of competition.”

The Gaelhawks also said they work closely and have actually opened up their workspace to the SIStematics to help build that sense of community among the students who will be at their level in years to come.

“As soon as you’re on a team, you’re a part of the team,” said one of the team’s captains, Josh Wilson.
To watch the international competition live, go to https://www.firstchampionship.org/watch-live. 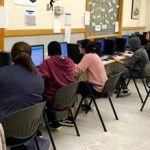 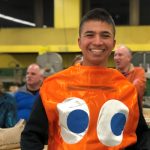